In the beginning – how SITCo founder, Gavin learned to Ski! 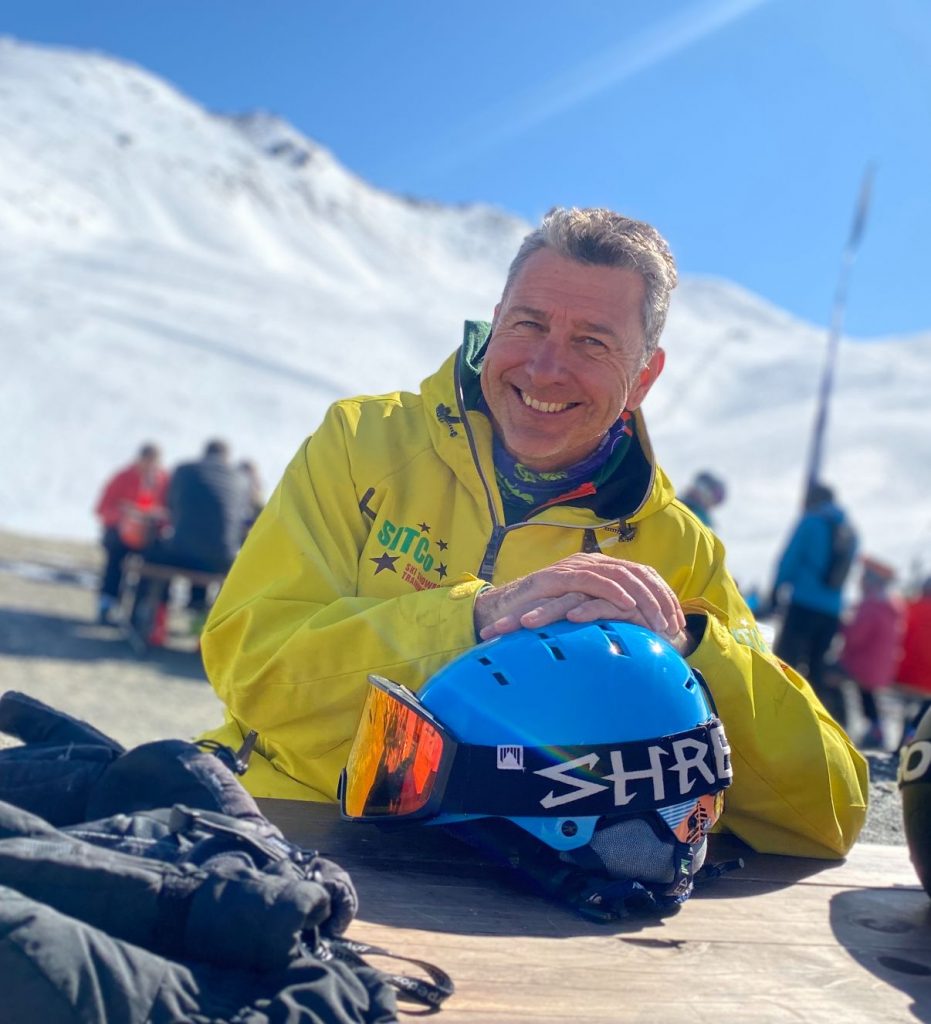 “I’m not gonna catch the gondola down anymore, I’m gonna ski back to the bottom.’

That wasn’t the very beginning, but it was pretty close to it. Day four in fact of my skiing career, and it wasn’t as though days one, two and three had been that successful.

Learning to ski in one of the best ski areas in Europe should be fairly straight forward, you would think, but due to a lack of early season snow the beginner’s slopes weren’t open and with true Kiwi “can do” attitude I was pretty confident I could learn without actually taking a lesson!

My first three days on snow consisted largely of me attempting to ski down a blue run and ride the lift back to the top. If only it was a chairlift! But alas no, it was a T-bar and so I fell over as many times trying to get back to the top of the run as I did skiing down! My legs were continuously shaking from all the effort to stay upright and I had more than a few bruises. So, skiing to the bottom of the mountain was hardly my brightest decision, especially as it entailed skiing a black run to get there.

I’d never skied while growing up in New Zealand and even while living in London it wasn’t on my radar. A couple of my good friends had spent the previous season in St Anton and when they returned (this is actually the beginning) to our flat in London they said something along the lines of “you should go Gav, you’re a good athlete, you’ll pick it up in no time.” And so, the seeds were sown. One of them even gave me an old pair (a very old pair) of two-metre-long skis he’d found whilst working for a furniture removal company. How could I say no?

Shopping began in earnest, I had no ski clothing, so I scoured the ski shops of London and ended up with a mismatched jacket and pants that fitted my budget and headed off to the snow. St Anton was full of Swedes dressed in top of the range (matching) ski wear. They looked like skiers even if all they did was hang around the bars and drink, I on the other hand didn’t look like skier on or off the slopes!

But that didn’t stop me, I bought a pair of ski boots, a season pass, found somewhere to live, started looking for work and earnestly listened to any advice the Swedes would give me. And I skied, or at least tried to ski.

And despite all the crashes and shaky legs and bruises, I really enjoyed myself, until I tried to ski all the way to the bottom that is!

Day four began as just another day, crashing and burning on the blue run and the T-bar, until I decided that I was gonna conquer the mountain and ski to the bottom. The journey started reasonably well, it was pretty cruisy for a while there but then I got to Kandahar, the black run. Man did it look steep. And icy. I took it on with true Kiwi bravado and I’d like to say I made a few decent turns before it all turned to custard but the truth of the matter is I fell on my first or second turn and began to slide. I did mention it was icy, didn’t I? It was so icy that once I started sliding I couldn’t stop. I really started to pick up some speed and piece by piece was losing all of my equipment. This was definitely the fastest I had travelled on snow, unfortunately I was on my belly and travelling face first. All sorts of people were giving me advice, but I didn’t speak any German or Swedish so it was largely wasted, and besides I could hardly hear anything at the speed I was travelling.

I eventually came to a stop and the good people of St Anton brought my skis and poles from various spots on the slope down to me and asked if I was ok. Physically I was fine, mentally not so much, but I managed to pull myself together and somehow ski the rest of the way to the bottom of the mountain, where I may have indulged in a celebratory and conciliatory beer or two!

I may not have gone skiing the next day, I can’t remember (maybe I had more than two beers) but I know for a fact that I didn’t try skiing back to the bottom of the mountain for a week or two after that first experience.

So, it was back to blue runs and T-bars for a while. I still didn’t take a lesson, but I was hanging out with a friendly Norwegian bloke, who was an excellent skier, so he helped me out.

The season progressed reasonably well, my skiing skills continued to improve, and I got good enough to hang out with some of the better (and more patient) skiers and explore more of the ski area.

On one particularly memorable occasion I skied straight into a group of Austrian ski instructors. They were standing in a large circle, no doubt discussing the finer points of wedeling. My entry into this conversation was less than spectacular, I slid in on my back, and just lay there looking up at them. I smiled and said “gidday”, now I don’t speak German but from the expressions on their faces I don’t think they were saying “gidday” back to me. In fact, what some of them said took quite a few sentences. “Schizer” was an oft repeated word amongst them. Anyway, no harm was done other than to my already fragile skiing ego and they all skied off and left me where I was without any offer of help.

There were many highlights that season – powder days, parties, tobogganing, wipe-outs – but it’s fair to say that the biggest highlight was me falling in love with the challenge of skiing. My ski career has taken me to many places, but St Anton and that first season still remains as one of the best.

I would like to receive communications about SITCo, stories and matters of interest.

I would like to receive communications about SITCo, stories and matters of interest.